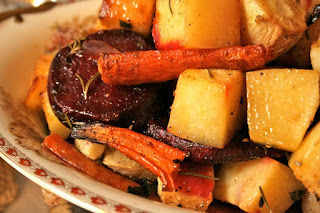 I’ve been playing with variations on this Wolfgang Puck recipe for years. It’s a terrific destination root vegetables, and a perfect addition to the Thanksgiving table.

DIRECTIONS
Heat 4 cups of water in a saucepan over medium heat. When the water reaches boiling, boil the beets for 15 minutes.

While the beets are cooking, preheat the oven to 400F. Place the beets in ice water for a minute, and slip off their skins. Slice beets into 1/5 inch slices. Put the beets and the rest of the vegetables and the herb sprigs in a large baking dish. Season well with salt and black pepper, drizzle generously with olive oil, and toss them with your hands to coat them evenly. Put the baking dish in the preheated oven and cook, stirring the vegetables occasionally, until they are tender and golden brown, about 45 minutes.

Served up by Tod Dimmick

Thanks for subscribing! Please check your email for further instructions.

Thanks for subscribing! Please check your email for further instructions.